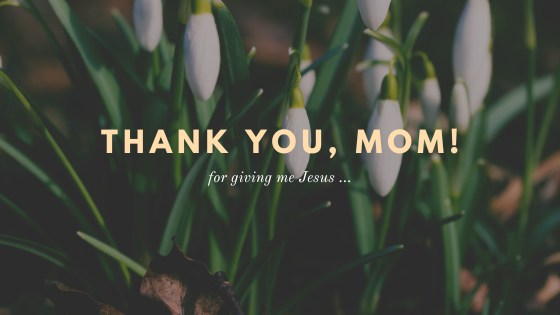 For my mother who gave me Jesus

There was once a little girl who had bad dreams. She would wake up crying and fearful. Sometimes she would tumble out of bed. One time she woke up sobbing; the night was so dark and she was so cold. Lost and finding no blanket, she raised up and hit her head. Where was she? While still asleep, she had fallen and had rolled underneath her bed! At her cries, her mother rushed into the room. Startled to find no child among the tussled covers, she called out, “Where are you?”

But mothers have a way of finding their children, even in the dark. She knelt and peered under the bed, and there was her little girl in company with little dust bunnies.

About the best place a frightened child can be is in a mother’s embrace. The little girl hugged her mother tightly and the night wasn’t so dark. The mother tucked the calmed child under the covers, snuggled beside her, and gently rocked her baby until sleep came.

In the morning light, the mother asked, “What shall we do about these bad dreams?”

“I could sleep in your bed,” the little girl suggested.

In her mother’s heart she understood the mystery of holding her children and yet letting them go. She told the little girl, “I have a better idea.”

She opened a book and took out a small picture of a man with long wavy hair and kind eyes. “I can’t always be with you, but here is someone who can. See his face? See the love there? That’s love for you. His name is Jesus, and he will chase away your bad dreams.”

That night the mother placed the picture of the Son of God under the little girl’s pillow. “He’s right there,” she said, patting the place where her daughter laid her head. “You don’t have to be afraid.”

Night after night the little girl slept soundly, no sobbing, no tumbling from bed, no bad dreams. The last thing she did before closing her eyes was to look on Jesus’ face then tuck him under her pillow.

Then one night a dream full of panic swooped upon the little girl, who woke up shaking and crying. “Come, Mom, come!” she called out. “Come quick!”

The mother came to her daughter’s side, stroked her face and wiped her tears. When the little girl was comforted, the mother asked, “Where’s your picture of Jesus?”

The little girl opened her cupped hands to reveal the crumpled and limp portrait. “It doesn’t work anymore. He’s all worn out.”

From that time on as the little girl grew, her mother taught her that Jesus doesn’t get worn out or used up. “He is not just a picture. He’s always there right there with you,” she lightly touched the little girl’s heart. “He covers the bad with his love. He is our calm and peace. We shall not be afraid.”

As a child, the little girl’s first thought during those dark, scary times was always “Mom!” But then her mother gave her child that bigger truth. And much later in the girl’s life during a time of great darkness and fear, her first thought became “Jesus!”