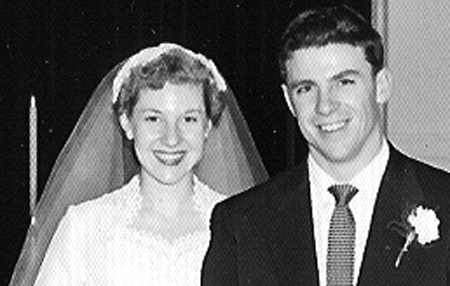 My Parents: Their Love Story

I never tired of hearing their story. As a little girl, I’d sit beside my mom with their wedding album spread across my lap, slowly turning the pages of 8×10 glossy black and white photographs. I’d trace my fingers along their faces, along 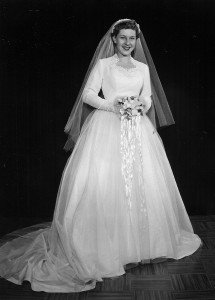 And she’d smile and her eyes would crinkle and she’d get that lovey-dovey look and then she’d repeat once more Their Love Story.

I’d smile too and stare at that photo of my mom looking so beautiful and my dad so tall and handsome.

And I’d listen to her story:

Your dad was tall and really good-looking as he stood by his junior high classroom door greeting his students. Besides coaching, he taught history and social studies. I often stole a few looks since my senior classes were nearby. That year I had many conversations with “Mr. Kehoe.” Sometimes when he had lunch duty. Sometimes when I had cheerleading practice. He was appointed high school cheerleader sponsor and I’d been a cheerleader for four years.

And your dad knew my whole family: our dads (your grandpas) played cards together; your Uncle Harley played on the high school football team; and he was friends with my older brother, your Uncle Charlie.

When high school graduation time came, I practiced my commencement speech, and I remember seeing my speech teacher and your dad sitting and listening at the back of the gym. After I had graduated in May, he called me early in the summer and asked me to visit a boy cheerleader who was in the South Bend hospital. I told him that I had planned to go shopping with my girlfriends, and he said, “I’ll take you shopping.” That came as a surprise, and I said yes.

At the department store he asked me to model the dress for him. I did and while I walked back to the dressing room, the clerk said something about “my husband.” I replied, “He’s not my husband.” She answered, “Don’t worry, he will be.” I wasn’t sure how to take that comment, so I just smiled.

On the drive home from South Bend, we laughed and talked all the way. We stopped and bought sweet corn, which we took to my house and cooked, and then we went to play golf.

A few days later he asked me out on a “real” date, and then we had a second date to a drive-in movie, where he told me he loved me. Your grandma was leery and cautioned me, “Barbara Ann, you know he’s older. Are his intentions honorable?” I guess they were because on the third date he proposed and I willingly accepted.

We were married that November during the Thanksgiving holiday. I went from a senior one year to a faculty wife the next!

But part of the story that I loved most, that all my life I thought was magical and wonderful and amazing and enchanting and oh-so romantic, was this:

Sometime before visiting the injured cheerleader, I had a profound experience. I was riding home one night with my girlfriends after spending the day at the lake. The talk turned to your dad, the most handsome, eligible bachelor in town and the girl he was currently dating. One of my friends asked, “I wonder if it’s serious? I wonder if they’ll get married?” At that precise moment, I heard an audible voice: “No, because you’re going to marry him.”

Startled, I looked around to see if anyone else had heard it. If they had, what would they think? Maybe I had actually said it aloud? No. They were still chattering away, completely unaware of what I had heard. Quietly, I sat there, squeezed between my friends in the middle of the front. Was that an angel? Was that God?

I always held that moment close in my heart. And then in a whirlwind, your dad and I had our three dates, and suddenly I was planning a wedding and then we were married… all in less than six months.

So, what do you think? Did God speak to me?

Now it’s come to this: 60 years of marriage! 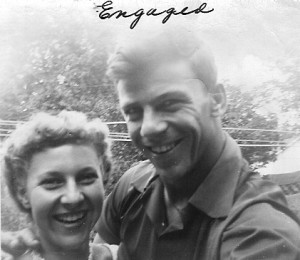 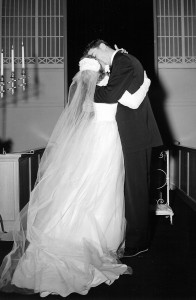 The kiss! Her veil came off! 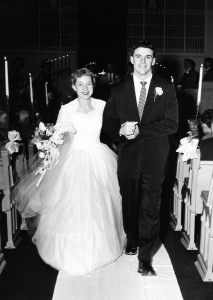 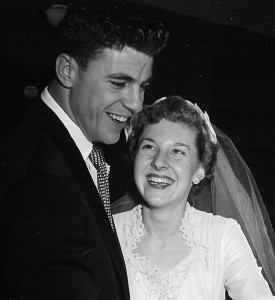 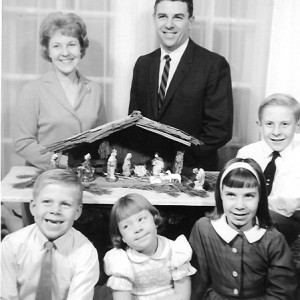 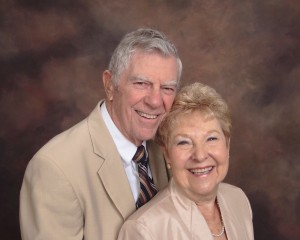 Happy Anniversary, Mom and Dad! I love you.

How Does a Man Love His Bride

From Fred Kehoe to his wife Barbara (on their 50th anniversary)

He loves her with a love

that is not conditional.

It is not dependent on anything

It is constant twenty-four hours a day

He loves her with a biblically based love.

Jesus is his teacher and example as

to how he is to love his bride.

The word of God is his textbook

in proving or measuring this love.

He loves her more than any other

human being on this, or any other, planet.

She is God’s gift to him,

There is nothing that can separate

his love from her.